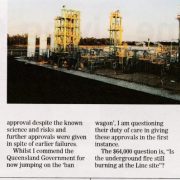 One company is proposing to use new technology to “gasify” the brown coal resource at Leigh Creek and use it for a large base load gas plant. Underground coal gasification has been banned in Queensland, but the South Australian government does not plan to follow that example.

“There is no need to politicise this process – the approval or otherwise of the proposed coal gasification project at Leigh Creek should be based on science,” Energy and Mineral Resources minister Tom Koutsantonis said in a prepared statement for RenewEconomy.

“Leigh Creek Energy will need to pass rigorous environmental impact assessments overseen by expert scientists if this project is to go ahead. We have a very effective regulatory framework in South Australia and the merits of the Leigh Creek Energy project will be assessed against that framework, not this decision in Queensland.”

(Seeing is not believing? Please note that the CEO of Leigh Creek Energy was a former Senior Manager with Linc Energy in Qld ! How does that make me feel safe? Ed.)

MENLO PARK, Calif.— A paper published in Science provides a case for increasing transparency and data collection to enable strategies for mitigating the effects of human-induced earthquakes caused by wastewater injection associated with oil and gas production in the United States.  The paper is the result of a series of workshops led by scientists at the U.S. Geological Survey in collaboration with the University of Colorado, Oklahoma Geological Survey and Lawrence Berkeley National Laboratory, suggests that it is possible to reduce the hazard of induced seismicity through management of injection activities.

Instead, the increased seismicity is due to fluid injection associated with new technologies that enable the extraction of oil and gas from previously unproductive reservoirs. These modern extraction techniques result in large quantities of wastewater produced along with the oil and gas. The disposal of this wastewater by deep injection occasionally results in earthquakes that are large enough to be felt, and sometimes damaging. Deep injection of wastewater is the primary cause of the dramatic rise in detected earthquakes and the corresponding increase in seismic hazard in the central U.S.  Read more at http://www.usgs.gov/newsroom/article.asp?ID=4132#.VSRCQWc5DX6

Strike Energy hands back its licence to the State Government,

After ten years of research into the possibilities of mining lignite in the South East, Strike Energy has handed back the licence to the State Government and gone elsewhere. After eight years of protests re lignite mine and associated activities, campaigners and residents have cause to celebrate. Campaigner Anne Daw called into the studio to speak with Barometer’s Sue Reece and let us know all the updates.

Listen to this interview here;

Last Friday’s report into the former Queensland government not only exposes the inadequate regulation and approval processes for coal seam gas and coal mining in Queensland, but also the failure of the state’s leaders to put the health of their constituencies first, according to a leading medical group.

Doctors for the Environment Australia is calling on all major parties to support wide reforms to protect Queenslanders from CSG and coal mining, both of which pose significant threats to the health of Queenslanders.

“Likewise they both oppose a ban on fracking and the establishment of a royal commission, which would look into human health impacts, animal deaths, crop contamination and impact on water supply. This is a tragedy society must seek to avoid”

In its report, the inquiry made 20 recommendations which included a moratorium on new CSG approvals in the state, a ban on fracking and also recommended the state review all mining decisions made under the Newman government where environmental laws “may have been ignored” or where “potential conflicts of interest” or political donations “were involved in some way”.

DEA supports the inquiry’s main recommendations, and in particular the need for a royal commission for this will investigate the human health impact of coal seam gas mining and allow the government to wipe the slate clean of many mistakes by both recent state governments.

DEA’s recent submission into the Queensland Government administration made a scathing critique of the lack of process associated with fracking projects in Queensland. There was a lack of data, a rushed and grossly inadequate environment approvals process, insufficient evidence about health outcomes and poor regulation of existing wells.

DEA’s main concerns centre on CSG’s production of large quantities of potentially contaminated water by chemicals used in, or generated by CSG mining. Many of these chemicals are known to have adverse, long-term health effects, including endocrine (hormone system) disruption, fertility and reproductive effects, and development of cancers.

Internationally, there is growing evidence that fracking has contaminated groundwater and caused air pollution and the potential long-term health effects are starting to be detected. In the US scientific literature shows an increased prevalence of heart defects in children whose mothers lived in close proximity to gas fields.

However, there has been no systematic evaluation in Australian of potential health impacts for those working or living in proximity to CSG mining, a major omission in the approval and monitoring process of mining developments.

DEA highlighted several examples of failure to adequately monitor wells.  In the case of the Santos GLNG project in the Bowen and Surat basins, the 2013-2014 half- year report from the Department of Environment and Protection showed that out of a meager target of ten inspections for the period, only one inspection was completed.

Dr King, says, “The Government’s abysmal performance in this matter suggests it has thrown caution to the wind. As doctors, we’re deeply concerned about what this means for the wider community, particularly those living close to wells, and we urge the Federal Government to implement greater regulation on the fracking industry in Queensland.

“As doctors, we call on our leaders to put public health first- it’s critical that we follow the precautionary principle in any new development, rather than rush headlong into practices with possible adverse health effects purely for short term profits, ” says Dr King.

Doctors for the Environment Australia submission to the Inquiry

Here are the Petroleum Exploration Licences in Limestone Coast.

A coal seam gas field within 200 metres of residents in south-western Sydney has been revealed by the government regulator to have suffered a series of leaks.

The Environment Protection Authority report found one in 10 of the well heads in the Camden gasfield were leaking methane gas, despite an earlier 10-day investigation by AGL giving the field a clean bill of health.

The leaks, and the EPA and AGL’s failure to release the information until it was sought under freedom of information laws, have caused much concern.

Also, residents want to know why the NSW government’s 2 kilometre buffer zone for CSG in residential areas (in place since last year) does not apply to the thousands of residents living in the Camden electorate right now.

It appears that the leaks detected by the EPA were not picked up by AGL so there is a question mark over AGL’s ability to regulate itself.

The NSW Government has announced the cancellation of three coal seam gas exploration licences held by Leichhardt Resources Pty Ltd due to the company’s failure to comply with licence conditions. The cancellations are PELs 468 near Rylstone, 469 near Nowra and 470 near Moree. This announcement comes after years of hard-fought community campaigning.

Minister Roberts said the licences were cancelled under the Petroleum (Onshore) Act 1991 on the basis that Leichhardt Resources had contravened or failed to fulfil specified conditions of the licences.  More specifically the Minister cited two areas of concern that were raised with the coal seam gas company as justification for the cancellation of the licences:  The allegation of not complying with the requirement for community engagement was raised in relation to all three licences; and the allegation of not complying with its work program obligations was also raised in relation to PEL 470.