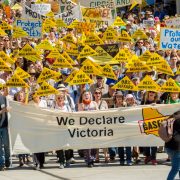 The Victorian Government’s decision to ban fracking is based on sound economic and energy policy.

Queensland’s experiment in unconventional gas has demonstrated that the economic benefits promised by the gas industry largely failed to materialise, and there has been an enormous downside to other industries.Arguments that the gas is needed have rung hollow as Australian domestic gas demand projections have been repeatedly slashed by the Australian Energy Market operator (AEMO), and a global oversupply of LNG has led to a crash in export prices.

Gas industry funded research into the impact on local communities in Queensland’s gas field areas has found that;

“The manufacturing industry has been one of the biggest losers with LNG exports allowing gas suppliers to drive up prices to Australian users, and suppliers exercising their market power keep Australian prices high even as global prices collapsed,” Principal Adviser at The Australia Institute, Mark Ogge said.

“We now have the ridiculous situation that Australian gas is now cheaper in Korea than it is in Australia. That’s a double-disaster for local manufacturing jobs.

“Experience now tells us that mining more gas in Victoria would not bring local gas prices down.

“Victorian shale gas is very expensive to extract, and wouldn’t be extracted unless gas companies could sell it at the current high prices.

“The days of cheap domestic gas are over – we are sending all the cheap gas overseas.

“Nor have promises of royalties materialised. Royalty projections in Queensland have been repeatedly slashed to a small fraction of original projections.

“Now the companies are even challenging Queensland Governments calculation of the emaciated remaining royalties.

“What benefits there are, have gone almost entirely to the overseas owners of global oil and gas companies licensed to export Australian gas, largely at the expense of Australian businesses and local jobs,” Ogge said.