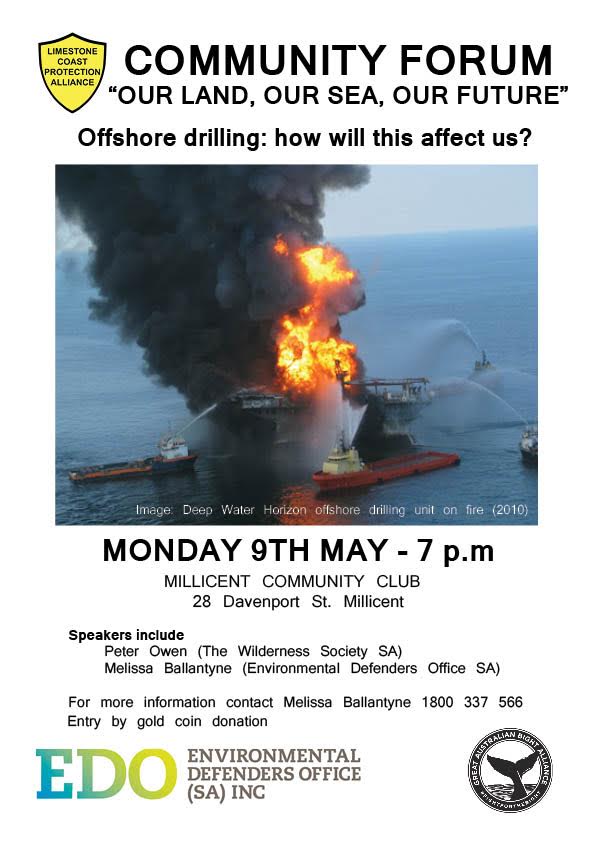 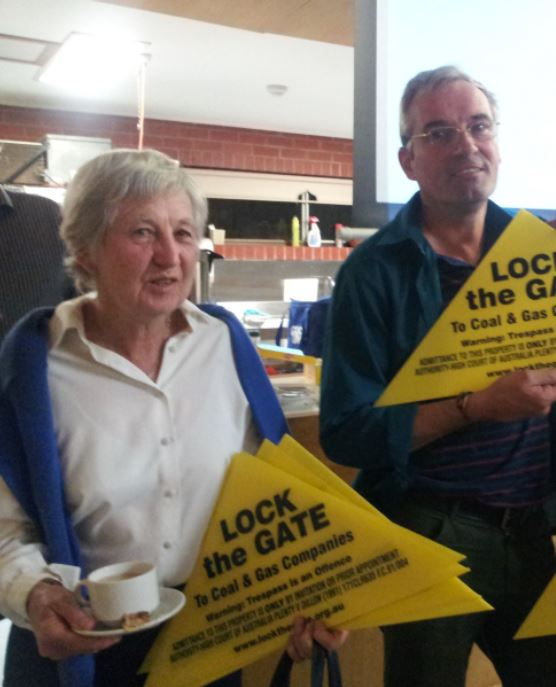 Following her interview on 5THE FM on Friday 21st February, Dr Catherine Pye addressed the meeting arranged by Millicent Field Naturalist Society and the Limestone Coast Strike Out Alliance, in Millicent.  Dr Pye has lived in Mt Gambier for 23 years, has been a GP for 16 years  and a Locum for 17 years, and is actively involved in advocacy for health. She said she is concerned that doctors will not   know what the long-term health effects of unconventional drilling will be with in the community.

Rosie Pounsett from Millicent Field Nats welcomed 60 members of the community attending the meeting which was held to create awareness about unconventional drilling. Charmaine Taylor Symes, business owner from Penola, said in describing the film;  it is an Australian Film,  what happened to Australians and  said,” I believe that this film is – rather than being overstated, it is understated, in describing the adverse affects unconventional drilling can have on a community both economically and on their health.” The film ‘A Fractured County  ‘ – An Unconventional Invasion was screened and questions were welcomed from the floor. The film featured Australians whose lives and health has been affected for ever.  Creek water igniting, tap water igniting, children’s nose bleeds, and children’s skin chemical burns from bath water were among some of the adverse affects shown.

Dr Pye said:- “We need a healthy environment,  and healthy water for our communities to be healthy overall and anything that could endanger  these seriously concerns me,” she said.  “I understand that the whole of the lower South East of SA is covered by an exploration licence. They have drilled south of Penola and will soon drill north/west of Penola. These are test wells, not fracking, but they drill down through our aquifers to a depth of about four kilometers and I am concerned about the integrity of the well. If this fails it can release chemicals into the aquifers.”

Dr Pye said, “if they go ahead the landscape will change considerably. A shale gas field is a vast network of oil pads, roads, pipes, compressor stations and flair pits. Wells can be just five kilometres apart and if there are hundreds or thousands of wells across the South East it will devastate the landscape.” When asked about our farmers and their rights, Dr Pye said, ” Farmers have no rights, they can say they don’t want drilling but ultimately the farmer has no rights in South Australia.” “Fracking is a process that involves forcing chemicals underground and this is not the only concern, it is the chemicals that are released from underground too,” she said.

Each drill hole uses up to 14,7000,000 litres of water and 56,800 litres of chemicals and proppants are used. The same chemicals are used for fracking shale and for coal. In a report from the United States it was reported that 944 products are used to frack, 633 of them are chemicals. Three quarters of these could affect eyes, skin, kidneys, brain and a quarter of them could cause cancer.
In Australia there are about 60 chemicals used and Dr Pye said as a doctor she is concerned about what they are.

“Chemicals used in fracking have to be disclosed in Western Australia but not in South Australia, and as doctors we need to know what is being used and potentially what patients may have been
exposed to when they present at our surgeries and emergency departments.” “Reports from Wyoming show household water is now black and can’t be used. Drinking water has to be trucked in for the whole town.” “In Queensland symptoms appearing  include nose bleeds, headaches and school problems.”

“The Robe Council is supporting a moratorium and we hope that all councils in the South East will do the same,” she said. Dr Pye has a special interest in mental health and said a recent paper by a psychologist in the Hunter Valley, where fracking is taking place, says that the uncertainty and stress alone can have an effect on mental health. “I am a strong believer in community and health is a big part of that,” she said. Fracking is a term used to describe the fracturing of underground rock formations with horizontal drilling. This
process is not an old process with years of research to show if it is a safe procedure; it is relatively new, only being used since 2007 in cluster drills. The horizontal  drills have high volume, high pressure water and chemicals forced underground to fracture the rock. Loss of well integrity allows the escape of methane and volatile organic compounds such as benzine (a carcinogen) to escape into the aquifers or air.

It has been reported that particles of chemicals used in this process can travel through the air, landing on roofs, polluting the air and water in communities during the disposal process of the water after the drilling process. Additional concerns about the drilling process are;- heavy machinery traffic, flaring, well integrity failure,  24 hour noise, collapse of the holding ponds releasing toxic overflow into land
and water ways, devaluation of farms and homes, devaluation of houses, escalation of rentals prices making rentals out of the reach of local communities. Most employees in the drilling industry are
fly in fly out and so money is not often spent in the local community.

‘In the Beach Energy Environmental Impact Report, Beach proposes to burn any excess hydrocarbons in a vertical flare. The burning off of gas from a new well releases Hydrogen sulphide, methane and
btex chemicals (benzine, toluene, ethylbezine, xylene) into the air, as well as mercury, arsenic, and chromium. The USA banned flaring after January 2015.’(provided by the Dr Pye  encourages communities to contact their councils and ask for a four year moratorium on unconventional drilling, to allow time for further research into the safety of this process. Landholders were encouraged to put ‘Lock the Gate’ signs on their gates as a peaceful non-cooperation that shows companies and the government that landholders are determined to protect their land, water and health from inappropriate mining.

One of the concerned people attending the meeting,  Barbara Cameron of Beachport  said, ” Good planets are hard to find, we need to protect the one we have. If our water supply is damaged and we
don’t have water – we have nothing.”

Two closed meetings are arranged for March 11th with Wattle Range Council in Millicent and SELGA in Penola. Representatives from Beach Energy, DMITRE, DEWNR, Anne Daw, and Dr Gavin Mudd will be in attendance at both meetings. There will be no health representation at the SELGA meeting, but there will be at the Wattle Range meeting.
Click here to view the film The Fractured Country