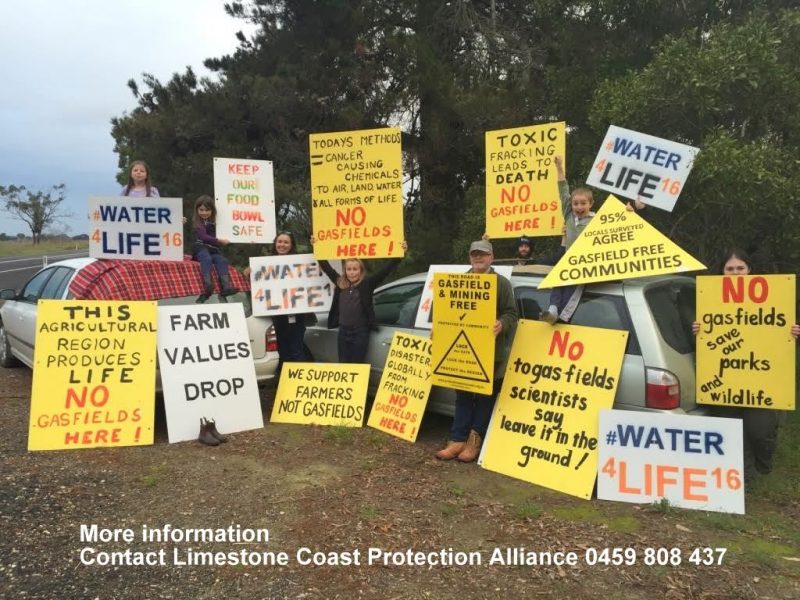 Come and meet Phil Laird and Annie Kia from Lock The Gate Alliance who will share how communities are winning, and what you can do to protect your ‘Mining Free Brand’ and protect your livelihood, land and families.

Phil Laird is National Campaign Coordinator of Lock The Gate. A farmer, he understands the harm that contamination can do to rural enterprises. Phil will speak about serious risks that flow from lack of insurance cover for unconventional gasfields.

Annie will present recent evidence from shale fracking in the US.

This will be Annie’s fourth visit to our region. As Lock The Gate Community Engagement Coordinator, she helps communities develop their own Mining and Gasfield Free strategies. 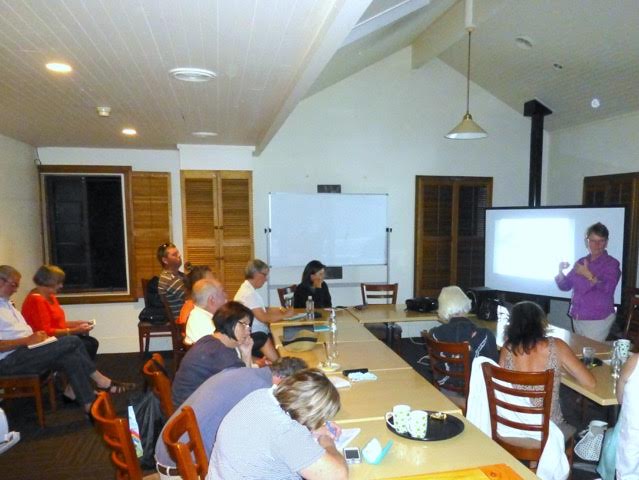 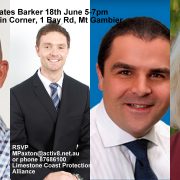 Master of Ceremonies will be former ABC presenter and personality, Stan Thomson who will also act as adjudicator as the candidates are asked questions from the floor.

Candidates for Barker in the Federal Election who have accepted an invitation to attend are sitting Liberal member, Tony Pasin; James Stacey, (Nick Xenophon Team); Yvonne Zeppel (Family First Party); and Mat O’Brien, (ALP). The Greens will also field a candidate in Barker, but they have not yet released the candidate’s name.

As nominations do not close until June 9th there may be further nominations who will also be invited to join the Forum.

Candidates will be given an opportunity to briefly discuss their policies, background and personal commitment before being asked to answer any questions from the floor.

This will be your opportunity to ask the candidates any questions about the issues that concern you within the electorate of Barker.

Light refreshments will be available after the Forum when participants and candidates will have any opportunity for informal discussion. 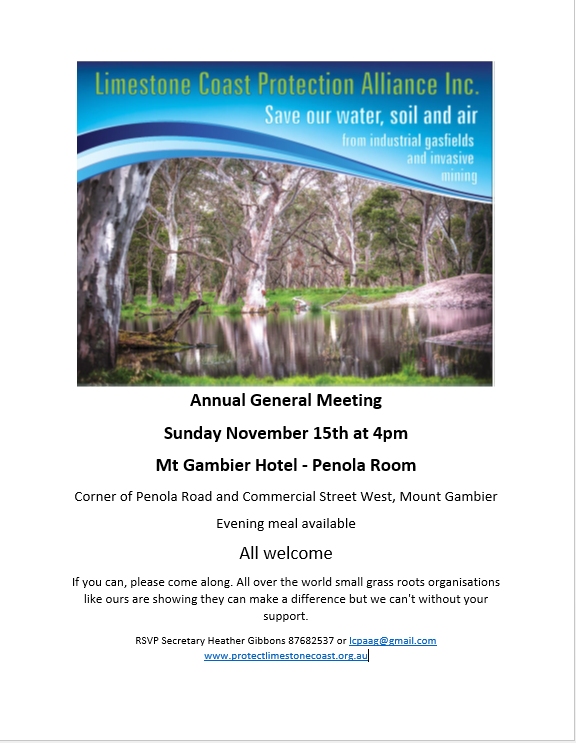 If you can, please come along. All over the world small grass roots organisations like ours are showing they can make a difference but we can’t without your support.

The Mount Gambier Subcommittee of the Limestone Coast Protection Alliance (previously Mount Gambier community group) is excited to announce we will be hosting this Public Meeting. We have a special guest, comedian Rod Quantock (OAM) who will provide us with a highly entertaining view on fracking.

There will be some short video clips filmed outlining concerns on water and health.

All welcome.  Bring your family and friends along to this free night of entertainment. 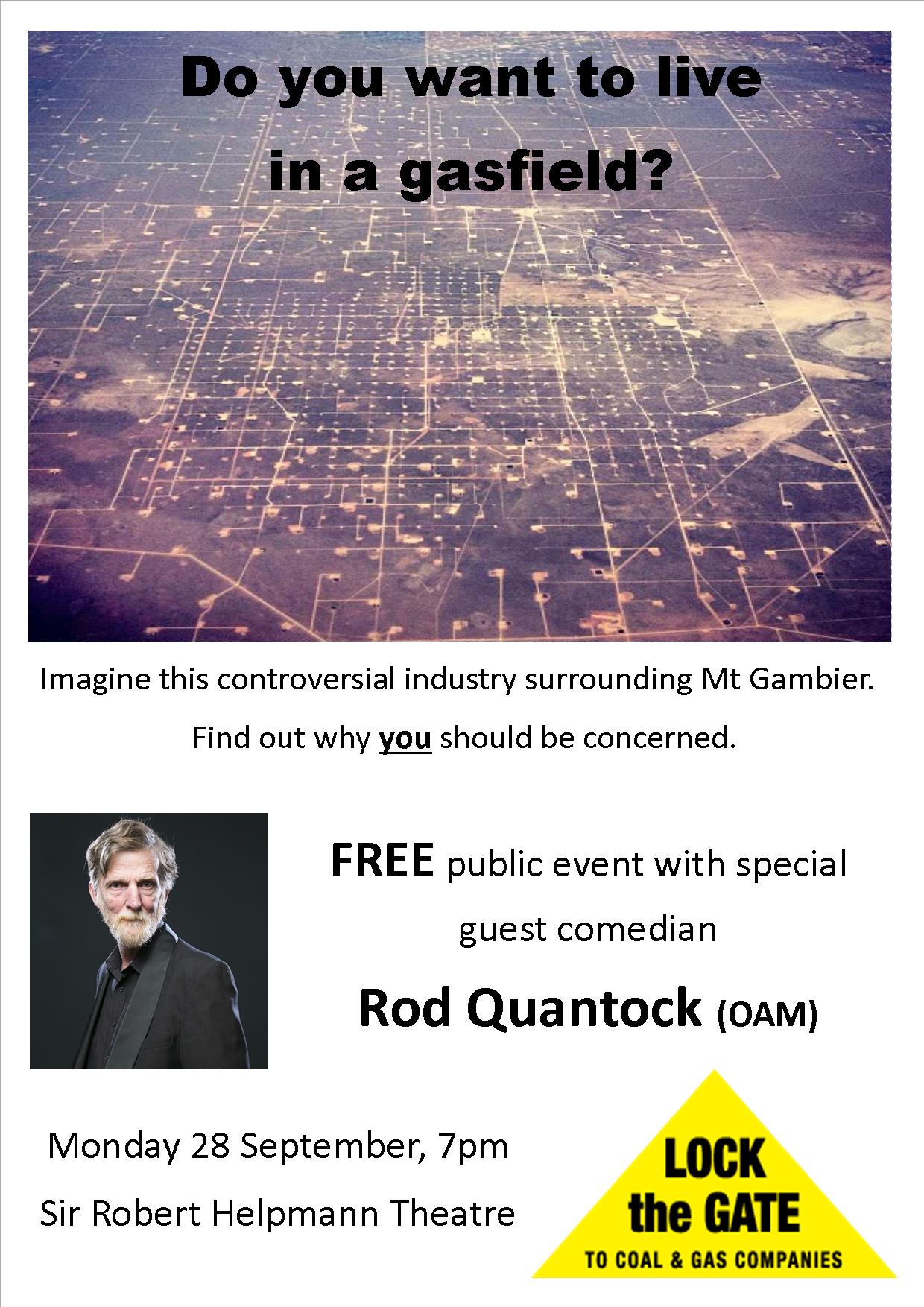 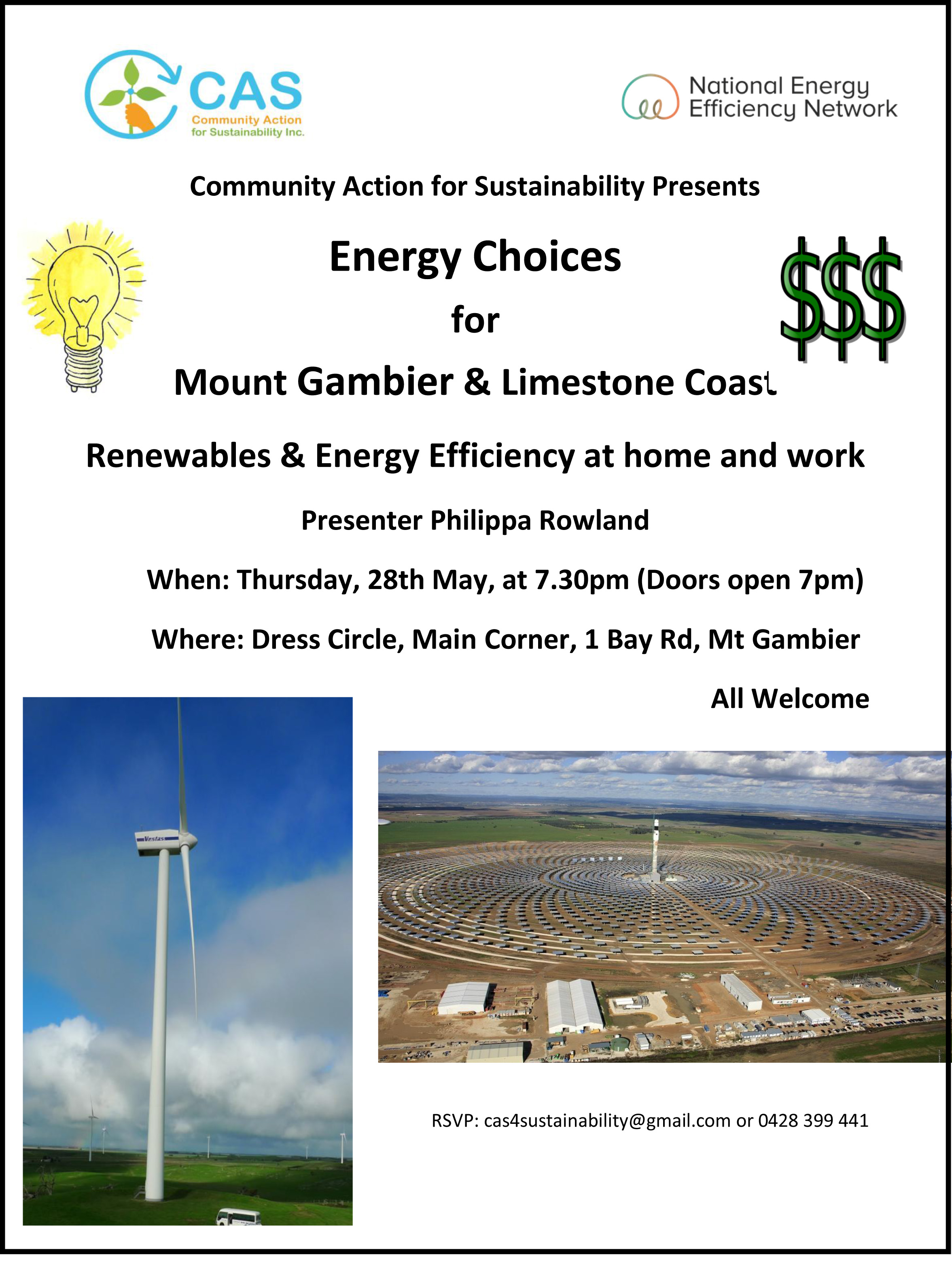 Get involved, find out how we can stop the gasfields from developing in the Limestone Coast of SA 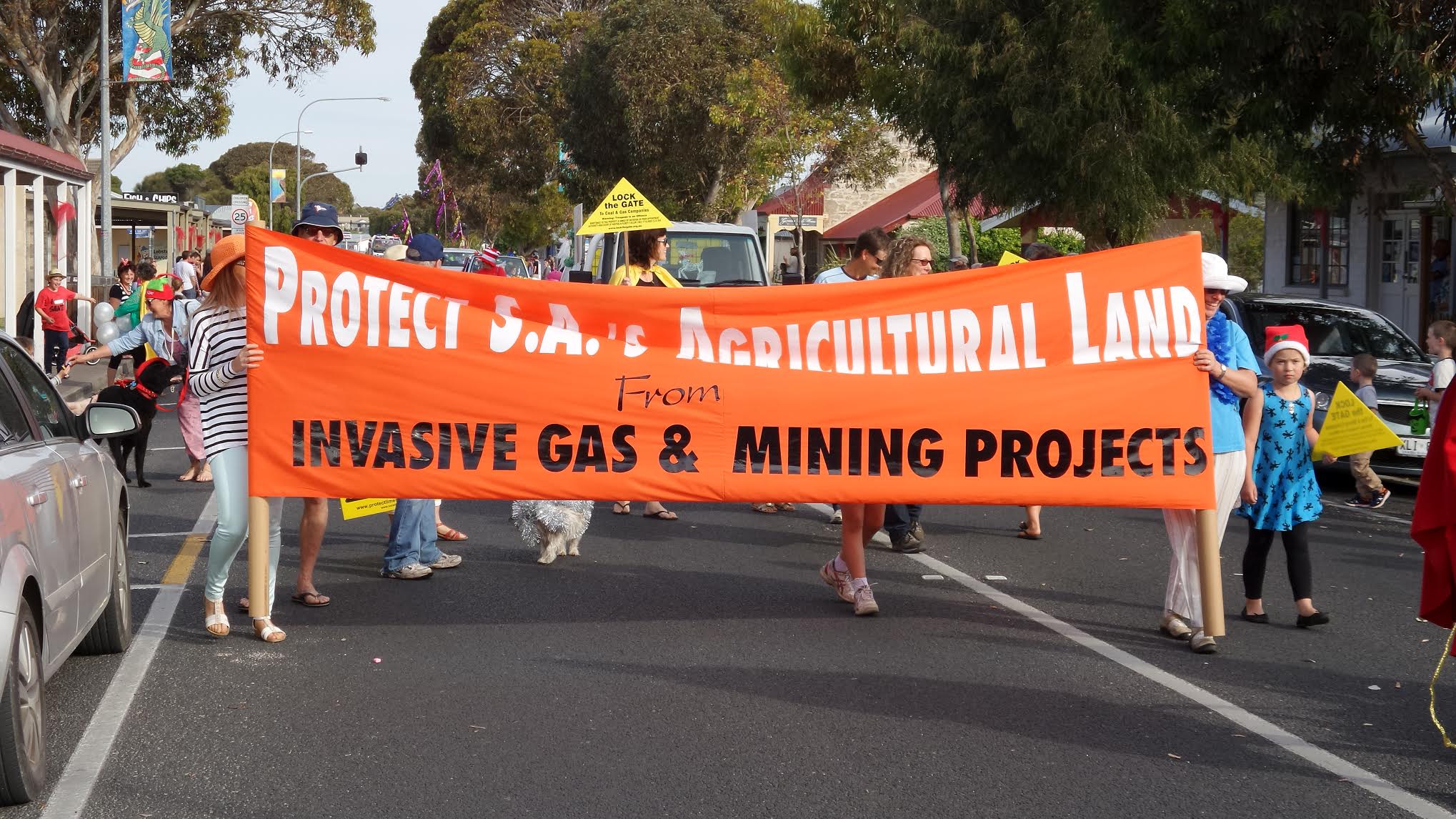 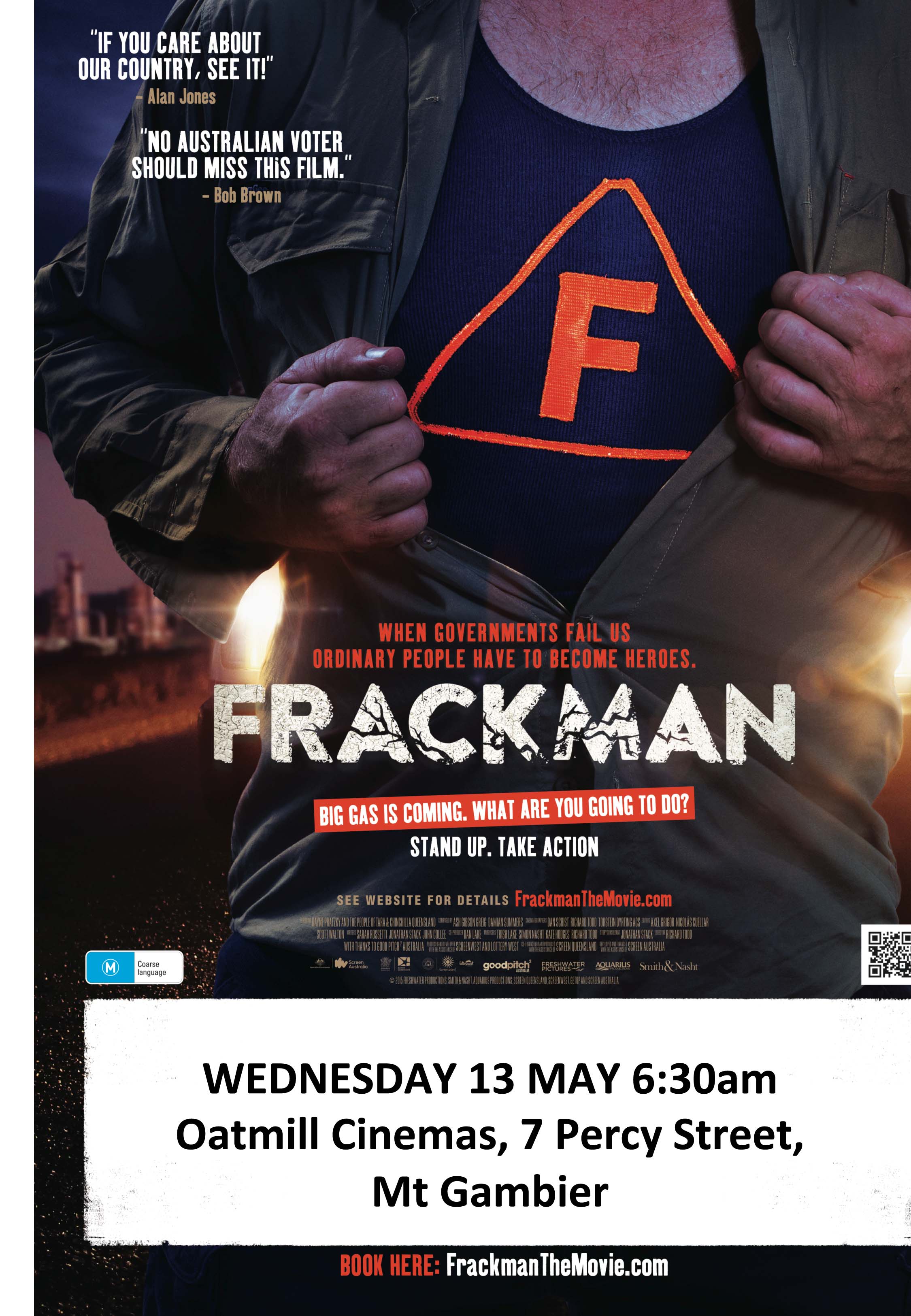 Premiere Screening of Frackman the Movie

The movie requires that 53 more tickets to be reserved by 4th May or the screening will not proceed.

To book you go online at Frackmanthemovie.com (your credit card will not be charged until we have reached the target 67 tickets, guaranteeing that the screening will go ahead). Look up screenings and scroll down for Mount Gambier – http://frackmanthemovie.com/screenings?r=

Come and watch a FREE film with your friends about what’s threatening this beautiful region we live in. We are all connected by a common thread and that thread being water.  Are YOU willing to stand by and watch that water be put at risk of contamination?

Please come along and get informed and help secure the future for our children.

Come and watch a FREE film with your friends about what’s threatening this beautiful region we live in. We are all connected by a common thread and that thread being water.  Are YOU willing to stand by and watch that water be put at risk of contamination?

Please come along and get informed and help secure the future for our children.

Thursday 16 April 6:30pm  – please note following this there is a special event at the METRO Café opposite on Commercial St East with music, food and entertainment to support local groups opposing unconventional gas.