Santos Energy is seeking approval for a new waste treatment plant at its controversial pilot coal seam gas field in northern NSW without identifying how it will dispose of the briny and potentially toxic end product.

The Santos venture at Narrabri, which has already cost the company about $1.2 billion, was drawn into the state election campaign when Opposition Leader Luke Foley declared a Labor government would not allow the gas field’s exploration licence to be converted to a production licence if it won office.

The issue of CSG may prove key in several electorates on Saturday, including in Barwon in which the Santos field sits, with several long-standing Nationals candidates facing big swings against them for supporting the industry.  Read more at www.protectlimestonecoast.org.au/santos-csg-wastewater-to-top-1-million-litres-a-day/

Indonesian Mud Volcano due to Fracking

Amazing that it took 5 years for the majority of scientists to agree it was caused by drilling for gas – and that Santos paid a princely sum of about $22M to get out of it. To date I don’t think any compensation has been paid to all those home owners ! 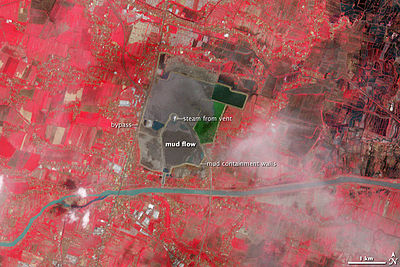